Stars: Mitch,Tiner,The Train and Will Lund.

Ever heard of Sunn Classic Films? Charles E. Sellier ? Robert Halmi Sr.? These filmmakers used to do projects that were exactly what people wanted to see over & over again.That’s a gift that is sorely lacking for viewers today.

Ron Ford is the autuer behind this mini-HORROR/WESTERN (google it),It has real horses,actors dressed authentically for time period and some cool effects.

There are two actors,we wanna highlight,Mitch Tiner (see interview elsewhere) is the bad guy and does some amazing transformations…Think Fred Olen Ray’s go-to tough guy Ross Hagen( waiting while you go look up his IMDB) mashed with Paul Naschy beastiness ,Will Lund plays a proud american indian in the tradition of Trevor Howard ( Windwalker) and Alex Cord (Grayeagle,Which was directed by Charles B.Pierce)…Get it ?

So,If your a horse lover,This film has real horses,Amazing I know;But you may not like what is done to one of them*SPOILER WARNING.

The make-up is pretty great and Mitch Tiner becomes A BEAST before us.

There is some bad,Which is hard to understand with talent involved,Some of the footage is murky or VHS-like and some ADR(gunshots and lip-sync matching) did’nt come thru.

THE DEVIL-with WINGS audiobook,Hints of Batman mythos back in 1940s pulp !

This audiobook was different in a good way,The lead role has a filmic quality that would lend itself nicely.

There is alot of war plane action heard and near death instances where escape seems impossible.

Exotic war events against Japan and treasures to be had by victor.

So,The costume of THE DEVIL WITH WINGS is all black,aviator hood with oval eye lenses( Which isnt removed thru 85 % of  story),black gauntlets,black high boots—Sound familiar ? (cough) DARK KNIGHT RISES ???

There is these guys who cant even show up for class in a Community College !

Then the place they really wanna be is a local bar,And its closing unless someone buys it.

The buddies decide to raise the money,Probably similar to making this movie and save the bar.

A lot of funny bits,Good cast with even quasi-celebrities that viewers have heard of.

Nice script,good little moments and what a perfect ending.

This film would be similar to a PORKYS,National Lampoon Fill-In-The Blank or dare I say American Pie series.

DARKEN — Unicorns Can Be HOTTTT !

This actually a decent action packed urban- fantasy about Good Vs. Evil .

An honest man just trying to survive being ‘ Joe Average’ in a vicious world.

John Johnson has some chops and fists and some fight-a-bility (c) ,Not really much to look at,Sorry Bub,But dude can kick some arse when pressed.

Whisper Nicole really is quite something to watch,First thought she was an angel or wood nyph and then the BIG SHOCKER about The Unicorn and some scenes to prove it.

The villian is truly pure evil and his hench-people really enjoy their tasks.

There is voodoo,creatures unseen and this assassin with a bad eye and attitude to match.

This David Prior – directed effort is really good monster flick,There was a prior thought to go straight to television or edited with an eye for commercial insertion ?

The old tv adage about ‘Showing The Bear Early…’ or however it went,May apply here,The creative side OR producers want you to see WHAT FRIGHTENS you and then cut to results of mayhem.

Besides DAVID PRIOR making a director’s comeback,He has REB BROWN acting like the kind of sherriff we fondly recall,SHERRY ROSE being the Lois Lane-ish pal and FRANK STALLONE as a classic heavy.

The monster is almost as brutal as a human monster,DAVID CAMPBELL,Who has alot of screen time and deserves it.

TED PRIOR  is a consummate actor,Not seen much since late ’90s and has a good guy bent, Except this go round.

LEILANI SARELLE has a story arch,That’s right there is a story to this monster hunt from Midnight Releasing.

DAVID PRIOR – Action Director Icon directs NIGHT CLAWS and Is Back To Entertain The Waiting Faithfull ! 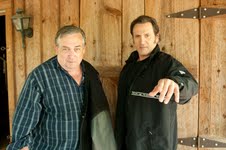 Hostile Environment1) Thanks for doing this interview,You prefer directing or writing ? Why ?

I like doing them both.  But probably prefer directing.  Is us usually a bit more satisfying.

2) Watched your career since the Action International Pictures days,You miss the studio ?

I do not miss the studio but I miss the money I used to make when we had it.

Frank Stallone:  Competent, wonderful guy with a great personality.
Reb Brown:  Is the kind of guy everybody would want for a best friend.  Just a great guy.
Ted Prior:  What can I say about my brother.  Over the years he has become quite an accomplished actor and on the production side he work with me like no other can because he knows me so well.  And he is always the one to keep the set as fun as it can possibly be.
Leilani Sarelle:  Is an amazingly beautiful girl with a great deal of talent.  Leilani does not take roles lightly and really puts the work into understanding and becoming her character., something that makes the director’s job much easier.
Jason David Frank:   A good guy who will step up and try anything it takes to make a shot work,  A good one to have in action films.

I am not sure what you are asking me with the above two questions, but if you mean the actors I will not answer these because there is no way to do that without making someone feel unhappy about it and I don’t like to do things like that.

6) A sequel DEADLIEST PREY to DEADLY PREY,You happy with this ?

I am happy with The Deadliest Prey and I think we will do well with it.  Fans of the original will definitely like this one.

Not the new Hollywood but a much easier place to make a movie.  And I don’t mean a money thing.  It’s just easier.  Much, much less red tape and B.S. and people for the most part in Mobile are very polite and courteous.

8) Opinions on a real BIGFOOT ?

It seems to me that if Bigfoots were real, someone, somewhere wouldl have shot one by now, but who knows what lurks out there?  Certainly not me.

I agree and have had several friends beg me to try to make that again on a higher budget.

10) Here’s that chance to reel in your faithful fans,Talk directly to us with wisdom ?

We set out to make “Night Claws” much like the horror movies of the 80’s, with a real creature and not all the C.G.I. and that is exactlly what we did.   The movie is meant to be scary and fun and I really do believe it accomplishes both of those things.  And if you knew me you would know that I rarely speak that well of any of my movies.  So make sure you see Night Claws and then “Relentless Justice” and very soon “The Deadliest Prey”.
In closing, I will say that I have been very fortunate to make all the movies I have made so far and for the most part I have loved every minute of it and I regret having taken ten years off from it, but I can’t get them back do all I can do now is try to make up for it.  So if you find something you love doing, stay with it!  Keep watching and check with me on facebook anytime.
David A Prior

SLAUGHTER CREEK…Sooo,You Wanna Be In Pictures ?

So this girl from the mid-west wants to be a star,

She tried Hollywood proper and didn’t do too well

A documentary crew is on her side to follow her

dreams and become a naked legend.

Well, David Prior and Jeff Murray have competing monster movies for us to enjoy.

Jeff Murray,Side Show entrepreneur,Has got into film-making in a big way with a Februrary ’13 release of BIGFOOT’S WILD WEEKEND with David Novak and DT Carney.

NACHO MOUNTAIN – Eat Your Heart Out ,’Ya Nibblers !

‘Nacho Mountain’ is like a BROKEN LIZARD production,You know those ‘Super Trooper/Club Dread/Baby Makers ‘ movie troupe,But It’s not by them.

Very funny consistently without a let up on food jokes, It emphasizes those eating contests.

Likable cast with Kevin ( Meegosh) Interdonato getting the most laughs.

Lots of characters to fill the scene and almost all have something funny to give.

GUNMAN’S TALLY-Audiobook that chaps your hide till you say QUIRT !

So this green horned small rancher owner gets a reputation for defending is land against mean,hired guns and winning at the draw…Shades of John Wayne’s WHO SHOT LIBERTY VALANCE movie,But this pulp novel turned audiobook was written decades before that movie.The western characters are awesome and the fight scenes are so vivid,Your minds eye will make the rest of your head duck during the cross firing of a wave of bullets.

Second tale on CD, RUIN AT RIO PIEDRAS, is about cattles,rustlers,bad labeling of names and the love that went on in the Wild,Wild West !

Did’nt really take to hero’s voice,But Jim Meskimen, Was awesome as always as both good/bad guys in the saddle.

Oh,Before I leave you, A QUIRT,Is mentioned profusely and well its a’ whip’ that cowboys used alot,evidently…